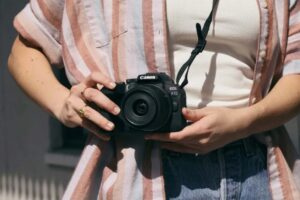 Canon Malaysia has recently listed the local pricing for the new EOS R7 and EOS R10, which are also its first APS-C offerings from the EOS R mirrorless camera line-up. As you may recall from our previous report, the brand launched both devices for the global market late last month.

To recap, the EOS R7 is the higher-end model from the two. It comes with a larger 32.5MP APS-C CMOS sensor with 1.6x crop factor, paired together with Canon’s DIGIC X image processor. These enables the camera to deliver high-speed readouts of up to 30 fps continuous shooting with AF/AE tracking, as well as producing high quality images and videos at up to 6960 x 4640 px (JPEG L/RAW/C-RAW/HEIF) resolution and up to 4K UHD Fine (7K oversampling) respectively. Also onboard are an In-Body Image Stabilisation (IBIS) of up to 8 stops, an ISO range of 100 to 32,000 (expandable to 51,200), and Canon’s Dual Pixel AF II system which offers extensive autofocus and tracking coverage across the whole frame.

Meanwhile, the Canon EOS R10 features a smaller 24.2MP APS-C CMOS sensor with 1.6x crop, along with the same DIGIC X sensor as its sibling. Its readout is slightly slower at up to 23 fps with AF/AE tracking, while its image quality comes in at up to 6000 x 4000 px resolution for stills and up to 4K UHD (6K oversampling) for videos. The camera offers an ISO range of 100 to 32,000 and the Dual Pixel AF II system for autofocusing and tracking. However, unlike its sibling, it does not come with in-body image stabilisation, though it does feature support for Optical Image Stabilisation (OIS) equipped lenses.

Like the R7, the EOS R10 shares a similar EOS R design language but with noticeable differences, and also comes with Canon RF lens support. Its body is slightly smaller and lighter, weighing only 429 grams. Also onboard is a 2.36m dot EVF, 3-inch 1.04m dot LCD touchscreen, a single UHS-II SD card slot, built-in Bluetooth and WiFi connectivity, a USB-C port, pop-up flash, multi-function shoe, and LP-E6NH battery support. However, it does not come with a Quick control dial like its sibling.

According to Canon Malaysia’s website, the new Canon EOS R7 and EOS R10 are priced at RM 6,199 and RM 3,969 respectively for body only.Local retailers Shashinki and YL Camera are now accepting pre-orders for either model, though their expected date of arrival has yet to be announced.

It’s also worth noting that the latter is the most affordable offering from the brand’s EOS R mirrorless camera line-up thus far, provided that you’d settle for an APS-C shooter. Alternatively, you may want to consider the Canon EOS RP (now priced at RM 4,389) if you’re opting for a full-frame shooter instead.