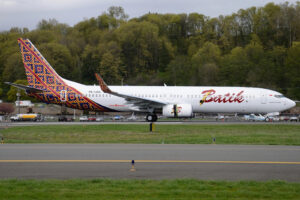 Batik Air, the airline previously known as Malindo Air, is reinstating direct flights from Kuala Lumpur to Denpasar, Bali starting from today. This is the second Indonesian route that the airline has started operating since Malaysia reopened its borders, with the first being twice-daily flights to Jakarta that began at the end of March.

It will initially be offering four weekly flights between 2 June and 24 June, but the frequency will increase to two daily flights( 14 times a week) from 25 June onwards, and it will continue to adjust the capacity based on demand. According to Batik Air, a one-way ticket from Kuala Lumpur to Denpasar, Bali starts from RM489.

Indonesia has made travel for tourists relatively simple as international travellers entering the country do not need to take a pre-departure or on-arrival PCR test as long as they are fully vaccinated. However, they are required to purchase travel insurance that covers COVID-19-related medication and hospitalisation.

A report by Google has revealed that demand for international travel in Southeast Asia has skyrocketed as more countries begin to welcome tourists again after two years. With the increased travel, ASEAN countries have banded together and agreed to work on mutually recognising each other’s vaccine certificates.

Coincidently, the consulate-general of Indonesia (KJRI) in Penang has also expressed interest in opening up more direct flights from major Indonesian cities to Malaysia to bolster both countries’ tourism industries. Before the pandemic, Malaysians made up a third of the total number of tourists in East Java.

Economic Consul II for KJRI in Penang, Aryadi Ramadhan, has revealed that direct flights between Indonesian cities and Penang are already in the works and will be finalised soon. Aryadi also said that the consulate is in talks to revive the ferry service between Aceh and Penang, which was previously shut down, although he did not give a timeline on when this might happen.