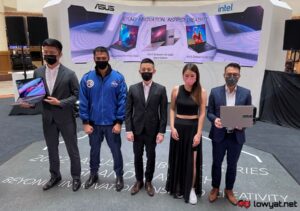 ASUS earlier this month unveiled throngs of new Zenbook laptops that will be heading to retail stores throughout the world very soon. In fact, some of them have just made their Malaysian debut this week.

Let’s have the ball rolling with the most affordable model that was launched at ASUS Malaysia’s Zenbook launch event which is the Zenbook 14 OLED (UX3402). For this year’s release, ASUS has provided the model not only with an OLED display but also a new exterior design that was apparently inspired by Kintsugi which is the Japanese art of repairing broken pottery with gold.

At the same time, the company claimed that the laptop’s chassis is durable enough to meet the MIL-STD-810H standards. The Malaysian variant of the 1.39kg laptop comes standard with a Pantone and VESA DisplayHDR True Black 600-certified 14-inch display that has a native resolution of 2880 x 1800 alongside 90Hz refresh rate, 600nits maximum brightness, and 100% DCI-P3 colour gamut coverage.

16GB LPDDR5 RAM also comes as standard on the 14 OLED in Malaysia. The base variant which is priced at RM4,399 is running on an Intel Core i5-1240P processor and also has a 512GB PCIe Gen4 solid state drive while one can also opt for the variant that features Intel Core i7-1260P processor and 1TB SSD for RM5,599.

Moving on, the next model on the list is the Zenbook 14X OLED Space Edition (UX5401) which was essentially the star of yesterday’s launch event. This particular model was conceived to celebrate the 25th anniversary of the first ASUS laptop that went to space in 1997.

The said laptop was a P6300 which spent 600 days onboard Russia’s space station Mir. In the same year, two more P6100 laptops were sent to Mir as well.

In line with its space theme, the 2022’s 14X OLED Space Edition itself is said to be fit enough for space travel too since it is designed to meet the US Space Systems Command Standard SMC-S-016A standards. This includes the ability to withstand extreme vibration of between 20 to 2000Hz as well operational temperature from -24C to 61C.

The aesthetic aspect of the 1.4kg laptop revolves around space as well. For example, there is an etching of a morse code on its lid that said Ad Astra Per Aspera which means “Through Hardships To The Stars” in Latin.

The same quote was etched on the bottom part of the laptop. In addition to that, there are other morse codes throughout the laptop as well that depicts Mir station, P6300, and many more.

Another factor that made the 14X OLED Space Edition different from other Zenbooks is the existence of a 3.5-inch OLED monochrome display called ZenVision on its lid. Owners can use it to display customized texts, time, battery status, identify tag, and space theme animation.

ASUS has even crafted a special packaging for the 14X OLED Space Edition. It also includes a nifty accessories box that the users can utilize as a makeshift laptop stand that the company said is angled at 23-degree.

Similar to the 14 OLED, the 14X OLED Space Edition also carries a 14-inch 2880 x 1800 display although ASUS has opted for a touch panel for this model instead. 16GB LPDDR5 RAM comes as standard too but the laptop has a much more powerful Intel Core H-Series processor instead.

Designed mainly for creative professionals, the Zenbook Pro 14 Duo OLED (UX8402) has also made its Malaysian debut at the launch event. As you can tell from its name, this particular model is a more compact version of the Pro 15 Duo OLED since it carried a smaller 14.5-inch 2880 x 1800 120Hz display.

Even the secondary ScreenPad Plus display on the Pro 14 Duo OLED is slightly smaller than the one on its 15-inch counterpart at 12.7-inch which also has a native resolution of 2880 x 864. The display which ASUS referred to as the ScreenPad Plus lies on top of a raisable platform that is equipped with a mechanism called AAS Ultra.

Aside from making the screen slight easier to view, the platform can be tilted at an angle of up to 12-degrees. ASUS claimed that the AAS Ultra implementation also improves airflow and can cut up to 7C off from the laptop’s operating temperature.

For our market, the Pro 14 Duo OLED can only be obtained with an Intel Core i7-12700H processor for the time being. Priced at RM8,999, the dual-screen laptop also comes standard with NVIDIA GeForce RTX 3050 Ti graphics, 16GB LPDDR5-4800 RAM, and 512GB solid state drive.

Meanwhile, ASUS has also announced the arrival of the Zenbook Pro 16X OLED (UX7602) in Malaysia. Dubbed by the company as the most powerful Zenbook ever, this particular laptop was not on display at the launch event even though you are already able to order it from ASUS dealers throughout the country.

Just like the Pro 14 Duo OLED, the Pro 16X OLED also features the AAS Ultra section but it houses the laptop’s keyboard instead of an additional screen. The 2.4kg laptop also carries an integrated ASUS Dial that allows users to quickly access their favourite tools inside compatible creative apps.

In general, all these new 2022 Zenbook can be obtained from authorised ASUS dealers both offline and online throughout Malaysia. That being said, we do recommend you to give them a call first or check the online listing of these dealers to verify the actual availability of these laptops as they may vary from one dealer to another.