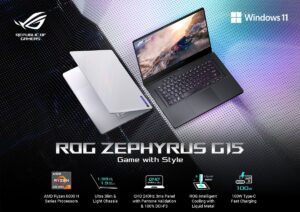 In conjunction with the ROG Zephyrus G14, ASUS is also officially bringing in the 2022 refresh of the ROG Zephyrus G15, the brand’s 15.6-inch gaming powerhouse that we reviewed back in 2021. Introduced earlier this year during a special ROG event, the G15 is also one of the recipients under the umbrella to receive the Ryzen 6000 series mobile treatment.

Aesthetically, the design of the G15 is identical to the original G15; like all Zephyrus models, including the G14, it still boasts the sleek, clean-cut design, as well as the Ergolift hinge design that, quite honestly, has become a staple in the laptop’s overall design language and serves as a distinctive feature of the lineup. Even if other brands have seemingly adopted it (read: Apple) of late.

Of course, there are a couple of physical differences to the G15, and they’re actually focused on the display panel. Firstly, it finally has a webcam; ASUS never installed one into the original G15, primarily due to space constraints brought about by the thin bezels of the laptop at the time. Well that, and the fact that the technology for thinner and smaller webcam modules was reportedly unavailable.

That brings us to the second physical aspect of the G15: the display size. It’s still a 15.6-inch panel,16:9 aspect ratio, and the same QHD resolution, but this time around, ASUS is offering two refresh rate options, 165Hz and 240Hz. More on that in the next paragraph.

Specs-wise, the G15 2022 models that we’re getting will have an AMD Ryzen 7 6800HS for a CPU, and not the Ryzen 9 6900HS as previously announced. The base model of the laptop will also ship out with 16GB DDR5-4800 RAM, an NVIDIA GeForce RTX 3060, and a 1TB of NVMe Gen4 SSD, but do note that the storage can be expanded via an additional NVMe Gen4 slot. As for the display, this model has the 165Hz refresh rate.

The top tier version of the G15 retains the same CPU, storage, and display resolution, but instead of 165Hz, the maximum refresh rate for this model is set at 240Hz. Further, it also ships out with double the DDR5 memory, and even comes with an RTX 3070 Ti discrete GPU.

Lastly, all G15 models ship out with a large 90WHr battery.

The ASUS ROG Zephyrus G15 2022 is already available in Malaysia and can be purchased at all ASUS stores and authorised resellers. Price-wise, the laptop starts at RM7999 for the base model, while the highest-tier SKU retails for RM9999. The laptop is available in two colours, Moonlight White and Eclipse Gray.