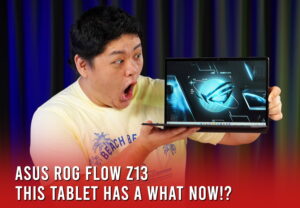 Announced back at the start of this year, the ASUS ROG Flow Z13 is perhaps what some would describe as the “next step” in thin and light gaming machines. Compared to last year’s Flow X13, the Flow Z13 is less of a laptop and frankly, more of a tablet.

Couple that with the simple, yet sleek chassis, a detachable keyboard cover that also comes with RGB LEDs, as well as a unique ventilation system that allows the Z13 to circulate the air through its back and push it out the top, up and away from your person and never directly to your face. Oh, and there’s also a stylus that comes with all Z13 units. What really makes the Flow Z13 special, though, is that, aside from the 56WHr 4-Cell battery, the laptop is designed to be charged and run off the provided 100W USB-C charging adapter.

Through this setup, we’re looking at a gaming tablet that not only runs Windows 11 but is also capable of running some of today’s more demanding AAA titles at a framerate between 30 and 40 fps, albeit at reduced visual presets.

In any case, we hope you enjoy this unboxing of the ASUS ROG Flow Z13 and do keep an eye out for our review of this gaming tablet.