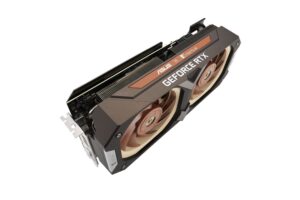 ASUS and Noctua, the Austria-based brand known for its air-cooling solutions for PCs, are reportedly set to collaborate once more to unveil a new custom-cooled NVIDIA GeForce RTX 40 series graphics card. The card is expected to be announced during CES 2023 next month.

Rumours of the Noctua-themed ASUS RTX 40 Series card first appeared from the Chinese tech forum Chiphell and more specifically, by one of its editors who goes by the handle “Napoleon”. One particular detail that isn’t confirmed is which model ASUS will be using as its focus.

As implied, this isn’t the first time ASUS and Noctua have taken custom-cooling with an NVIDIA card to another level before. The two brands first collaborated with the RTX 3070 in October last year, followed by their iteration of the RTX 3080 in May this year. On that note, given that NVIDIA is expected to officially announce its new mid-range GeForce RTX 4070 Ti at the same event next year, it wouldn’t be wrong to say that, perhaps it is that card that both brands have set their eyes on.

Having said that, it is also likely that both ASUS and Noctua may be showing off a GeForce RTX 40 Series fitted with an all-new cooler design, and probably with new fans for the Ada Lovelace generation of GPUs. Many of you certainly remember that as cooler as their cards were than non-tan-coloured cards, they certainly weren’t the slimmest, nor were they the prettiest cards to look at. But then again, Noctua is known for its focus on cooling and not its aesthetics.

For that matter, the ASUS and Noctua GeForce RTX 40 Series card could feature all-black fans with slimmer profiles, although how much slimmer is not known. As it stands, the latter has already developed a black-themed series of fans, and ones with more blades attached to the axial. Then again, this is the RTX 40 Series we’re talking about and given how big the Founders Edition SKUs are alone, it is also possible that we could be looking at a new custom card with a triple-fan configuration, instead of the usual two.