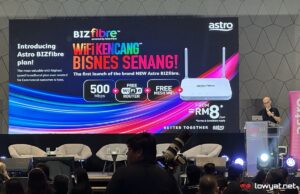 Astro took yet another step in its journey to becoming a full-fledged internet service provider (ISP) by launching dedicated broadband plans for the business segment. Branded as the Astro BIZfibre, the plan can also be bundled together with the company’s pay TV offerings.

For the standalone BIZfibre plans, businesses can obtain it with 500Mbps as the base plan which costs RM239 per month. Organisations that require faster connections can opt for the 800Mbps plan that comes with a price tag of RM299 per month.

Each plan comes standard with a free Wi-Fi 6 router in the form of the Huawei OptiXstar K552e (shown above) which the company has previously deployed to early adopters of Astro Fibre consumers earlier this year. When asked why Astro is not providing the new RG21 router instead, its Group CEO (Designate) Euan Smith noted that it just purely timing given the fact that the company has just begun shipping the new router to consumers last month.

Over time, the new router may be deployed for BIZfibre plan customers after Astro sort out the appropriate features and firmware for it to cover the business segment. Meanwhile, BIZfibre customers will also be provided with one unit of Mesh Wi-Fi device that they can utilize for free for 24 months.

For businesses that want to obtain content packages for their premises, there are three Commercial Packs available for them including the Elite Pack which allows them to show Astro content on three different screens concurrently. On the other hand, there is also the VIP and VIP Plus Pack that allows for up to five and eight screens, respectively.

When it comes to the number of channels that are available under each commercial option, the Elite Pack has 45 channels while the VIP Pack comes with 55 channels and VIP Plus Pack pushed the amount further to 66 channels. All three options are inclusive of 17 sports channels and yes, they also covered the upcoming FIFA World Cup Qatar 2022 as well as other major sporting events such as Premier League, Formula 1, NBA, UFC, and many more.

In conjunction with the launch of the new business-oriented Astro Fibre plans, Astro is now offering free BIZfibre access for all three Commercial Packs. The exact duration ranges for the free access offer from three to 24 months depending on respective packs with a starting price of RM1,412 per month.

Since Astro’s Commercial Packs can be customised to a certain extent according to the needs of each business, the final monthly fee may be different from what we have mentioned above. Hence, businesses out there may want to reach out directly to Astro for more details.