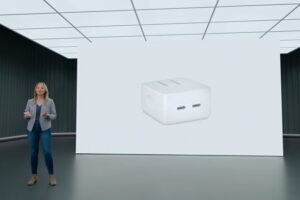 During its keynote at the recent WWDC, Apple took the opportunity to introduce the 35W Dual USB-C Port Power Adapter alongside the all-new 2022 MacBook Air. The charger is available in compact and standard sizes although only the latter has been listed on Apple Malaysia’s online store.

The company has recently published a support document which provides an additional look into its job as a multi-device charger. Specifically, the document reveals the amount of power that each port would deliver when two Apple devices are being charged at the same time.

Apple noted that the Power Adapter can distribute power automatically depending on the needs of each device. The document has provided some examples, as listed below:

Comes with a price tag of RM239, the 35W Dual USB-C Power Adapter is currently being listed as “Coming Soon” on Apple Malaysia’s online store. No charging cable is included with it though, so you need to fork out at least another RM99 if you need a first-party Apple USB-C cable to go with the charger.

On the other hand, the charger will be made available for free to those who purchase the new 2022 M2-based MacBook Air with 10-core GPU and at least 512GB SSD through Apple Malaysia’s online store. That being said, the fast charging feature on the new MacBook requires the 67W USB-C Power Adapter though which is also being offered without additional costs.

The feature would allow users to obtain 50% of the MacBook battery capacity with a charging time of just 30 minutes. So, in general, Apple is leaving the choice on the customer’s hands whether to have a charger that can cover both their MacBook Air and iPhone at the same time or one that could significantly reduce the time needed to replenish the juice within the laptop’s battery.