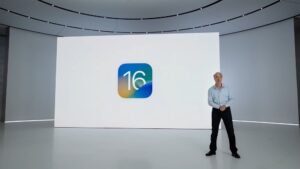 In recent years, Apple has given iPhones better customisation via the recent iOS 14. That being said, the lock screen has remained the rigid screen that you’ve always seen, with the only real customisable element being the wallpaper. But as announced during WWDC 2022, iOS 16 will allow a lot more customisations.

The customisations are also a lot more sophisticated than they look on the surface. For instance, the usual clock and the wallpaper get a new multilayered effect, creating a sense of depth by simply putting small bits of the clock behind the subject of the photo. On the subject of the clock, you can also change the typeface and colour of the text.

This multilayered effect is not limited to only the clock. You can also add widgets that share the same layer as the clock. As for the wallpaper, you can have it automatically shuffle between a few too.

In addition to being able to customise the lock screen, you can also have multiple lock screens. You can have each customised differently to not only have different photos as the wallpaper, but also different widgets. You can also tie this with the Focus feature. When you do this, the lock screen associated with a specific Focus will also limit notifications that are relevant to said Focus when you have it activated.

On the subject of notifications, Apple has made it so that with iOS 16, these roll up from the bottom, and are limited as to the maximum height they can reach. Wouldn’t want them to block your photo and widgets on your lock screens after all. App devs can also rework some notifications into Live Activities, which essentially turns a stream of live notifications into a widget.

Apple did not announce when iOS 16 will be available as a full release. But the company shared that a developer beta is immediately available, with a public beta version coming in July.