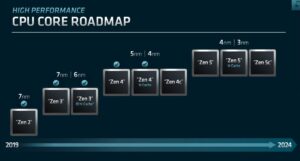 Besides speaking of its RDNA3 GPU architecture during its Financial Analyst Day call with investory, AMD also gave the folks some insight about its next Ryzen CPU architecture, Zen4. Not only that, but Mark Papermaster, Chief Technology Officer and Executive Vice President at AMD, also confirmed that AMD is planning on releasing a variant of the CPU architecture fitted with its V-Cache technology.

For those unfamiliar with the technology, AMD first introduced the V-Cache chiplet design back in June last year, and more specifically, the 3D V-Cache, during its Computex livestream last year. Speaking plainly, the chipmaker basically stacked three layers of a CPU’s L3 Cache on top of each other, effectively giving the lucky processor a whopping 96MB of memory to do as it wishes. That CPU, by the way, being the Ryzen 7 5800X3D that we reviewed earlier this year.

As effectively as the V-Cache technology is, the 5800X3D was not overclockable due to limitations in the manufacturing technology, and was hard locked by AMD. That said, AMD promised that this was a one-off implementation and with Zen4, it plans on making sure that CPUs running on the new architecture and V-Cache will be overclockable. The slides also show that Zen4 will be built around the 4nm die lithography somewhere down the line, and will be available in three sub-sets: Zen4, Zen4 V-Cache, and Zen4c.

As for how much of a performance boost Zen4 will have, Papermaster told investors that his company’s new architecture should have IPC gains between 8% and 10% over the current Zen3+ architecture. Additionally, Zen4 should offer approximately 25% better performance-per-watt and 35% overall performance over Zen3.

Aside from Zen4, Papermaster also briefly informed investors that Zen5 was in line to be launched sometime in 2024, with the architecture set to be based on both the 4nm and 3nm process, the latter presumably for the “+” variant of it, much like Zen3+ for its laptops. Further, AMD says that Zen5 would span out to three sub-architectures: Zen5, Zen5 V-Cache, and Zen5c. Unfortunately, no further details were given.

Najlaa Aina contributed to this article.