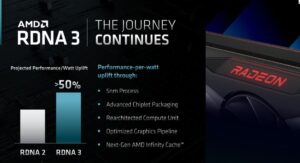 AMD officially confirmed the existence of its RDNA3 GPU architecture to its investors during its Financial Analyst Day 2022. The confirmation was given by David Wang, Senior Vice President of Engineering at Radeon Technologies Groups (RTG).

During the session, Wang told investors that RDNA3 will offer more than 50% better performance and uplift over the current RDNA2 architecture while making the bold claim that the latter is already more power-efficient than its rival’s own Ampere architecture. Additionally, Wang says that RDNA3 will also be built around the new 5nm process node, and will be the first GPU to feature a brand new advanced chiplet packaging, plus a “rearchitected” Compute Unit, Optimised Graphics Pipeline, and a Next-Gen AMD Infinity Cache.

As to when RDNA3 will be out, we may not have to wait too long to see it: AMD says that it plans on launching at least three graphics cards based on the Navi 3x architecture later this year, but stopped short of actually saying exactly which cards they will be. Presumably, these could be the three Radeon RX 7000 series cards that were recently discovered on Seasonic’s wattage calculator.

As a quick primer, someone on Twitter was messing around on the PSU maker’s page when they discovered the web tool was already listing three unannounced Radeon cards. Those cards were the Radeon RX 7700XT, 7800XT, and 7900XT. Again, while AMD has yet confirm their official names, the naming convention does seem on the nose, and with the revelation of RDNA3 and the promise of a launch this year, the appearance of those GPUs on the calculator could’ve been more than just a “cock-up”.

Beyond that, AMD wasn’t letting on anymore specifics about RDNA3. However, Wang did also speak briefly about the next-generation GPU architecture, RDNA4, making the obvious statement that the GPU will use a more “advanced node” than RDNA3, and that it will be introduced sometime in 2024.

The post AMD Confirms RDNA3 Architecture With Chiplet Design On The Way appeared first on Lowyat.NET.