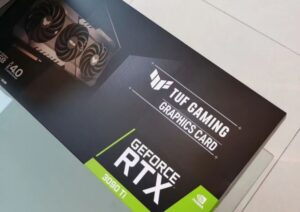 It is more or less a widely accepted rumour that NVIDIA’s next superpower graphics card, the GeForce RTX 3090 Ti, is expected to make its grand appearance at the start of January next year, followed by a general availability a few weeks after. In regards to that, a leaked image of what is alleged an ASUS TUF variant of the RTX 3090 Ti is making its rounds online.

The image was posted by prominent leakster HXL (@9550pro), who managed to snag it from the China-based site, ITHome. Basically, it shows the box of the component inquestion, complete with the ASUS logo at the top-left corner, along with the TUF Gaming sub-branding and model number of the card. In true NVIDIA style. Unfortunately, the picture doesn’t contain much else in terms of information about the card.

Word on the RTX 3090 Ti began appearing as early as September this year, when it was initially believed that the card would be the “Super” moniker instead of the “Ti’ at the back of its name. What is known so far is that the card will retain the same 24GDDR6X graphics memory, but will run at a much higher frequency of 21Gbps. Further, the card is expected to house 10752 CUDA cores, up from 10496 CUDA cores on the current RTX 3090.

As with all rumours, we highly recommend that you consume this story with a large grain of salt.