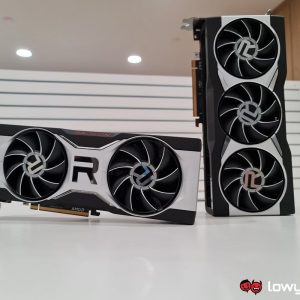 AMD’s alleged Radeon RX 7000 series has made its way online, and it did so in the most unexpected of places. The existence of the yet-to-be-released GPUs were discovered as configuration options on the wattage calculator for Seasonic, the company best known for manufacturing power supplies.

Evidence of the GPUs was first sniffed out by Twitter user SkyJuice (@SkyJuice60), who identified a total of three Radeon RX 7000 Series GPUs: the 7700XT, 7800XT, and 7900XT. Unsurprisingly, the listings of the GPUs have already been removed from the calculator when we paid a visit to the site ourselves. Mercifully, SkyJuice was able to take a screenshot with the calculator listing all three GPUs, so as to prove their claim on the social media platform.

Some placeholders by Seasonic Calculator.

Interestingly, and while not shown in their screenshot, SkyJuice also provides the recommended PSU for each Radeon GPU. The 770XT, in particular, will require a 650W or greater PSU in order to properly run, while both the 7800XT and 7900XT will require an 850W PSU or greater in order to run. In short, these PSU requirements are identical to that of the current Radeon RX 6000 series.

Another interesting point of speculation is that, based on the PSU recommendations taken off Seasonic’s wattage calculator, it seems unlikely that the Radeon RX 7000 series GPUs will be making use of the new 16-pin MicroFit MOLEX PCIe power connector that NVIDIA started using with its RTX 3090 Ti and is expected to champion with the launch of its next-generation GeForce RTX 40 series.

That being said, development for RDNA3, the GPU architecture in which AMD’s next-generation Radeon RX 7000 series is expected to be based on, began well before the 16-pin power connector came on to the scene.

In any case, the power consumption predictions of the alleged Radeon RX 7000 series are just that, predictions. As it is, AMD has yet to make any official announcement on its new graphics card series, let alone its RDNA3 GPU architecture, so we’ll just have to wait and see.