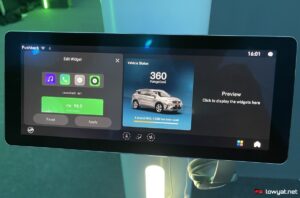 Local software company ACO Tech announced yesterday that its ATLAS (ACO Tech Local Automotive Services) operating system is now available for the Proton X50 via an over-the-air (OTA) update. This will replace the existing Geely Smart Ecosystem (GKUI) that is currently equipped on the vehicle, offering numerous improvements for navigation and voice recognition, among other things. Rollout for the new system is provided completely free of charge to all X50 owners.

To recap, ACO Tech first announced the ATLAS OS back in September of last year, and was later officially launched in early June 2022. The current version of the system runs on an open-source Android 10 platform, though it does not feature services or apps offered via Google Play Store. Instead, it comes with first-party navigation, entertainment, and voice control, as well as featuring its own digital storefront (known as A-Store) for obtaining compatible apps.

ATLAS is now available for the #ProtonX50!

Starting from today, X50 users can enjoy new features such as improved VR and navigation, customisable widgets and more.

Note: It may take up to 14 days for all vehicles to receive the OTA update. #ATLAS #ACOTech #LetACOBeYourEcho pic.twitter.com/9MJ5pnTvpC

Speaking of which, the company recently added Spotify support to the OS, thanks to a newly signed partnership with the music streaming service which was announced earlier this month. In addition, the deal would also see the app pre-loaded on all ATLAS-equipped Proton cars. Besides Spotify, other third-party entertainment services supported on the platform include Joox and Astro’s Syok.

Among the improvements offered by ATLAS OS over the GKUI system includes an all-new intuitive interface with multi-display capability, better navigation system, customisable widgets, phone mirroring capability via the ATLAS Auto companion app for smartphones, and reworked voice controls. In regards to the latter, ACO Tech says that voice recognition has been tuned to easily comply with our local accents and styles of pronouncing certain English words at varying tones and speeds. Which is actually impressive, considering the fact that there’s no other system out there that features this amusingly specific speech support.

Though just recently rolled out for the X50, ATLAS OS is available as standard on this year’s iterations of the Proton Iriz and Proton Persona. A rollout for the X70 model is also planned for sometime in 2022, but neither ACO Tech or Proton has confirmed a release date just yet. The software company also notes that it may take up to 14 days for the new OS update to be received by all applicable vehicles.