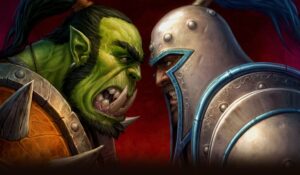 The years of Blizzard not releasing a new title under its Warcraft franchise may finally come to an end. According to its quarterly earnings report, the developer and publisher is planning to release an all-new game under the series sometime this year. However, fans of the series will be disappointed to know that the title is being developed for mobile devices.

“Blizzard is planning substantial new content for the Warcraft franchise in 2022, including new experiences in World of Warcraft and Hearthstone, and getting all-new mobile Warcraft content into players’ hands for the first time,” the company wrote. Unfortunately, the report did not provide any further details regarding the mobile game, such as its genre or whether it may feature some kind of business model (ie: in-app purchases, etc).

This reveal certainly harkens back to the time when Blizzard first announced Diablo Immortal for mobile devices during its annual Blizzcon event back in 2018. As you may recall, it was not well received – so much so that an attendee directly asked the publisher if the announcement was an out-of-season April Fool’s joke, and fans would later create memes out of Diablo Immortal lead developer Wyatt Cheng’s infamous “Do you guys not have phones?” response during the Q&A session.

Without a doubt, a mobile-exclusive Warcraft game would probably receive a similar backlash from fans. This is especially given the fact that Blizzard had not released a new title from the franchise, apart from the various expansions for its successful World of Warcraft MMORPG (massively multiplayer online roleplaying game). On that note, it is not known when the publisher is planning to officially unveil the new mobile game.

And just in case you missed it; the publisher – or rather Activision Blizzard – is currently undergoing an acquisition by tech giant Microsoft, which is slated to be completed sometime by mid-2023. Despite being under new ownership, the company revealed that it will continue working on new projects, such as the aforementioned Warcraft mobile game and an all-new unnamed survival game.

The post A New Warcraft Game Is Finally Coming, But It’ll Be On Mobile appeared first on Lowyat.NET.