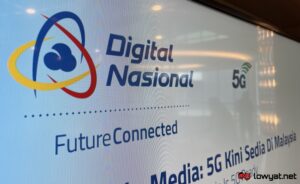 Digital Nasional Berhad today announced that the 5G network in Cyberjaya and Putrajaya as well as certain parts of Kuala Lumpur will go live in the middle of this month. This is in line with the company’s previous promise to have the 5G network online in these areas before the end of this year.

However, DNB didn’t specifically mention any telcos in today’s announcement. However, TM yesterday has revealed unifi Mobile postpaid customers in these three areas would be able to access the 5G network very soon.

In addition to that, TM has also confirmed that the company signed a deal with DNB to perform 5G trials which include service optimization. That being said, the company has not yet explained how exactly unifi Mobile customers can access the 5G network.

Once again, DNB pointed out that even at the weakest point of coverage, users can experience a speed of at least 100Mbps on its 5G network. Well, we hope we would be able to test that claim soon enough.

The post 5G To Be Publicly Accessible In Kuala Lumpur, Cyberjaya, and Putrajaya On 15 December appeared first on Lowyat.NET.